After the fall of the decadent Jinzurian Empire came the Dark Age. Unhindered by society, mages created enormous war machines. Mistrustful of goblin races, an unknown sorceror took vermin of the midden and raised them up to become his servitor race. Today, these “Centaurpedes” live in ruins and raid human settlements. 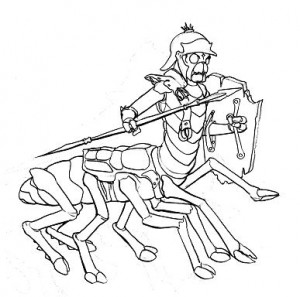 The centaurpedes are one of my favorite creations in the world of Quicksilver. They were originally just a sketch of a quadrupedal centaur-like creature wearing Greek helmet and armor. They’re ultimately inspired by the legend of the Myrmidons.

According to the story, the people of Thessaly were struck by plague. The king prayed to Zeus to restore the population. In the form of an ant, Zeus seduced their princess, Eurymedousa. From this union came the Myrmidons, the fierced warriors in the world. Achilles was their leader in the Trojan War.

(Thessaly was also supposed to be the home of the centaurs.) I’ve also drawn on inspiration from the legend of Cadmus of Thebes. After he killed a dragon, he planted its teeth in the ground. Up grew the Spartoi, who emerged already wearing armor and carrying weapons.

They would have rushed at Cadmus and killed him but, thinking fast, he threw a stone in their midst. Each thought the other had thrown it, and so they fought and killed each other, until the five best fighters were left standing.

The centaurpedes of the Quicksilver world (called Seloria) reference the ethical principle of self-determination. When Doctor Frankenstein created Adam, he took it for granted that his creation was property.

Given that Adam was missing natural empathy, a trait a natural-born human would probably possess, it’s appropriate that he should have been kept under control, and not allowed free to roam the countryside dropping girls down wells. In a sense we “create” children, but when mature, they become their own people.

If Frankenstein’s monster Adam had been, let’s say, a human clone (a creature who will develop entirely normal human emotions and behavior), at some point it would have a right to self-determination. Parental authority ends when a mentally competent adult is mature enough to take care of themself.

Like Adam, however, the race of the centaurpedes, enjoyed no nurturing childhood. They were cockroaches and ants converted from pests into servants and warriors. Why were they shaped like that? So that they could load each other with cargo and transport provisions and other goods.

They use whatever arms and armor they can scavenge- rusty breastplates; old helms. They can talk; they’re a cooperative social species. They probably could do their own crafting if they wanted to. Unfortunately, they seem to have a lasting cultural inferiority complex and a hostile attitude towards humans.

Psychologically, they’re not so far off from their human creators. Perhaps their greatest hurdle is that they’re so *good* at killing others and taking what they want. Born of a “Might Makes Right” culture, they have little reason to reform. …So, for now, they’ll remain angry alien foes, worthy opponents for our heroes.