Brother Garin operates a tiny chapel of the Way of the Colored Window in an especially rough section of Harstone. Garin instructs the PCs to deliver a package to Father Nelwin at his Way’s temple in Alliston, via a shortcut through the ancient Jinzurian tomb of Prince Robek, at the source of the Orvian River in the Hills of Beldorrum. “Keep it hidden, and you should be fine”, he says! 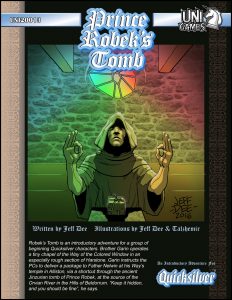 Jeff Dee has worked in the gaming industry for over 25 years. His artwork appeared in numerous games and magazines, including TSR's Deities and Demigods (as well as many AD&D modules and other early TSR products), Villains & Vigilantes, adventures for the Star Wars RPG from West End Games, and others. He co-designed Villains & Vigilantes, TWERPS (The World's Easiest Role-Playing System) from Gamescience, and Pocket Universe from UNIgames. Jeff has also worked in the computer games industry on games such as Ultima VI, Master of Orion, Master of Magic, and Wing Commander. He was the art director on Ultima VII, and the lead game designer on The Sims: Castaway Stories. Jeff currently works as a game design consultant, and operates two paper game publishing companies: Monkey House Games with V&V co-creator Jack Herman, and UNIgames with partner Talzhemir Mrr. UNIgames’ latest product is ‘Cavemaster’, the Stonepunk RPG. Cavemaster was the winner of the 2013 Three Castles Design Award.
View all posts by Jeff →
This entry was posted in Product Announcements and tagged fantasy, pocket universe, quicksilver, rpg. Bookmark the permalink.